When users first open iClone, the default project comes with a single character (female explorer). Users can change the character, customize the character outfit or face, or apply facial or body animation to the character.

To use iClone to build a 3D scene or animation without human character; you can simply build a project without any character. Select the “0_Man” in the template project gallery to initiate a non-character project. Some standard character functions such as outfit change, character animation will be disabled in this mode.  In 0 character mode, you can apply a standard character to replace the invisible 0_man anytime, or add characters by using CTRL + F7 to bring up Character Selection Panel, or simply go select the target character from Character Panel. 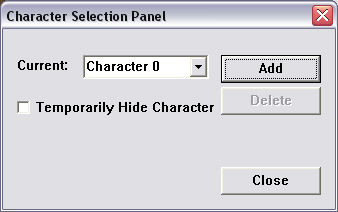 Temporarily Hide a Character – it only turns off the display of the character. However, the project still contains the data of hidden characters, and it will keep on consuming the computer resource. To create a project totally without character data presented, please choose 0_man project.